Taxes and international Free Port of Trieste: why victory is near

Trieste, 29 June 2021 – The first of the three civil lawsuits initiated by the I.P.R. F.T.T. – International Provisional Representative of the Free Territory of Trieste versus the Italian Government for the demonstration of the taxation rights of Trieste and of its international Free Port has reached the Italian Supreme Court of Cassation…

and is organizing further interventions of citizens and enterprises

The Free Trieste Movement has officially joined civil lawsuit No. 5209/2019 RG, registered at the Court of Trieste on 6 December 2019 by the International Provisional Representative of the Free Territory of Trieste – I.P.R. F.T.T. which has summoned before Court the Italian Government, some of its Ministries and bodies, including the Port Authority, and the Municipality of Trieste for breaches of the legal and fiscal status of the international Free Port of Trieste (LINK).

This lawsuit is the most tangible and effective instrument to obtain the respect of the rights of Trieste, of all other States, and of their enterprises over the international Free Port, which exists since 1947 as a State corporation of the present-day Free Territory of Trieste, sub-entrusted to the temporary civil administration of the Italian Government by the Governments of the United States and of the United Kingdom for their role of primary administering authorities on behalf of the UN.

This initiative has already attracted more than 100 intervention, and all citizens and enterprises can join the lawsuit by scheduling an appointment with the Office of the Free Trieste Movement by email (LINK) or by phone at 040/2470772 – cell. 333/3337776 during the usual office hours 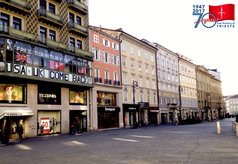 The Free Trieste Movement is a legalitarian organization established in 2011 to protect the present-day Free Territory of Trieste - FTT, an independent, sovereign State with an international Free Port, established on 15 September 1947 under the expected provisional regime of Government, entrusted, since 1954, to the Government - not to the State - of Italy. Its head office is in Piazza della Borsa 7, Trieste...

This subdomain is the intenrationional section of  the website of the Free Trieste Movement,  and it does also host the English version of blog "Ambiente e Legalita" - "Environment and Legality" by Roberto Giurastante.

This section hosts the main press releases  about the actions of the Free Trieste Movement to re-establish legality in the Free Territory and in the Free Port of Trieste.