About the Free Trieste Movement

The present-day Free Territory of Trieste is a sovereign State with the only existing international Free Port, independent since 15 September 1947 and under the expected provisional regime of Government which, since 1954, is sub-entrusted to the Italian Government - not to the Italian State - by the Governments of the United States of America and of the United Kingdom of Great Britain and Northern Ireland, in their role of primary administering Governments on behalf of the United Nations Security Council.

The office of the Free Trieste Movement - F.T.M. is in Piazza della Borsa 7, Trieste (see photo). 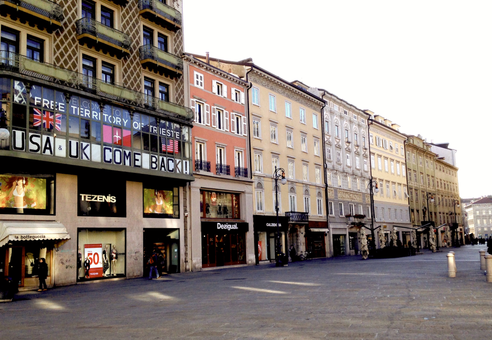 All information about the international Treaties and Agreements that establish the present-day Free Territory of Trieste and provide its legal order, the rights of its citizens and residents, and of the enterprises registered there, as well as the rights of all other States on its international Free Port, are published in the documents section of this website.

Those Treaties and Agreements are ratified, implemented, and fully enforced in the legal order of the Italian Republic, the Government of which is sub-entrusted with the temporary civil administration of the present-day Free Territory of Trieste, but the local administering Italian authorities are breaching those legal instruments.

The goal of the Free Trieste Movement is to re-establish the rule of law in the present-day Free Territory of Trieste - FTT, thus ending the severe damages caused by the lack of legal certainty in Trieste, and also ending the breach of the rights of the citizens and enterprises of the FTT, as well as the violation of the rights of all States over the international Free Port.

To achieve its goal, Free Trieste is promoting legal and political-diplomatic actions and it is organizing information campaigns: Free Trieste does not take part in elections or otherwise support and endorse political parties or ideologies. Finally, in 2015 the FTM promoted the establishment of the International Provisional Representative of the Free Territory of Trieste – I.P.R. F.T.T. an international legal subject acting as international representation agency upon delegation (LINK) and actively supports its legal actions.

This means Free Trieste is not a separatist or secessionist group, rather, it is a Movement that represents the legitimate interests of an existing sovereign State, internationally recognized and independent since 1947, and currently governed in accordance with a special trusteeship mandate.

Further information about the work of the Movement is published in its legal documents, chronologically published and described  in the Treaties section of this website.

News and updates about Free Trieste’s latest actions are published on its blog:   LINK.

To actively support the Free Trieste, all adult sympathisers (over 18) can request the office in Piazza della Borsa 7 (mezzanine) to join the Movement and become volunteers. All details, as well as the working hours, are published  HERE.

The present-day Free Territory of Trieste and its borders with Italy and with Slovenia.