International Treaties and the Free Territory of Trieste

On 15 September 1947, Trieste became an independent, neutral and demilitarized State with the only international Free Port in the world.

All of the Movement's acts, documents, and legal actions arebased on the international laws and treaties in force described on this page.

and the Treaty of Peace with Italy:

On 10 January 1947, one month before the signature of the Treaty of Peace with Italy, the United Nations Security Council approved the Free Territory's establishment, as well as accepting to become the guarantor of its integrity and independence with Resolution S/RES/16 (1947).

The Resolution, in English and in French, is available for reading and downloading on the UN's official website: HERE

The Allied and Associated Powers signed the Treaty of Peace with Italy in Paris, on 10 February 1947. Italy had entered WWII in 1940 on the side of Nazi Germany and Imperial Japan, and had surrendered without conditions in September 1943.

The official version of this Treaty of Peace, in English, French, and Russian, as well as an unofficial Italian version, is No.747 of the United Nations Treaty Series - U.N.T.S. Vol. 49: HERE

At art. 21, the Peace Treaty establishes that Italian sovereignty over Trieste ceases at the coming into force of the same Treaty. Since that date, Trieste and its province are a new, independent State: the Free Territory of Trieste. The Treaty does also provide the rules for the new State's provisional regime of Government (Annex VI) in the expectation that the U.N. Security Council appoints its Governor, in charge of enforcing the Permanent regime of Government.

Annex VII does also establish the first Government of State of the Free Territory of Trieste, entrusting its administration to the military commands of the Allied Governments that were already in the area (British and U.S. in the main administration zone “A”, Yugoslav in the secondary zone “B”).

The Italian legal order fully ratifies, recognizes, and enforces this territorial change and all of its legal consequences. The most complete and updated review on the subject is the legal expertise of the Law Commission of the I.P.R. F.T.T. (International Provisional Representative of the Free Territory of Trieste):  LINK

The Memorandum of Understanding

regarding the Free Territory of Trieste:

The Memorandum of Understanding is an additional, executive instrument of the Treaty of Peace, and it justified the transition to civil administrations due to the impossibility to put into effect the provisions of the Treaty regarding the short lasting of the military administrations.

Both the Italian and Federal Jugoslav legal order promptly enforced the new Memorandum of Understanding.

Indeed, the MoU has not affected, rather, it confirmed the international and mutual obligations of the three States involved - Italy, Trieste, and Socialist Federal Republic of Yugoslavia - as established under the Treaty of Peace with Italy.

After the dissolution of the Socialist Federal Republic of Yugoslavia and of its Federal Government, the U.N. General Assembly and the Security Council recognized with specific resolutions the new independent Republics of Slovenia and of Croatia in their existing borders, after plebiscites.

Slovenia and Croatia's borders included the secondary zone (or "zone B") of the Free Territory of Trieste, which the Yugoslav Federal Government had sub-entrusted to their local authorities when they were Federative Republics.

All U.N. Member States, including the Signatories of the Treaty of Peace with Italy, approved the two Resolutions. This fulfills the conditions at art. 30.3 of the Vienna Convention on the Law of Treaties (LINK), resulting in the unenforceability of the provisions of both the 1947 Treaty of Peace and 1954 MoU regarding Trieste's former “zone B”.

Its temporary civil administration is still sub-entrusted to the Italian Government, which exercises it to date, by the Governments of the United States of America and of the United Kingdom of Great Britain and Northern Ireland as primary administering Governments on behalf of the UNSC.

also known as the "Treaty of Osimo":

The 1975 agreement known as “Treaty of Osimo” is a political, bilateral agreement between Italy and Yugoslavia, registered with the U.N. Secretariat only in 1987, with which the two States renounced mutual claims on the Free Territory of Trieste.

Indeed, art. 7 of the 1975 Italian-Yugoslav agreement confirms that the obligations established with the 1954 MoU regarding the Free Territory of Trieste cease to have effect (only) in relations between the signatory States. This means those obligations are still in force within other international relations and in each of their domestic legal orders.

It follows that the 1975 Italian-Yugoslav agreement did not intend, and legally could not, amend the multilateral 1947 Treaty of Peace with Italy, the 1954 MoU regarding Trieste, or the consequent international obligations of the two States (or of their Governments) respect to the Free Territory of Trieste, including the rights of all other States over its international Free Port.

Additionally, we suggest reading the "Note by the Secretariat" published at the end of the index, which details, among other things, that registration of a treaty or agreement does not imply a judgment by the Secretariat on the nature of the instrument, the status of a party, or any similar question.

The present-day Free Territory of Trieste:

For all those reasons, the present-day Free Territory of Trieste is a small, independent European State that covers 212 km2, it has almost 240,000 inhabitants, and it has the only international Free Port in the world. It borders with Italy and with Slovenia, as well as being an important factor of cooperation in the development of international maritime trade and commerce.

Trieste is still sub-administered by the Italian Government under a special trusteeship mandate. Its primary administering authorities are the British and U.S. Governments on behalf of the UNSC.

The Italian Government exercises the sub-mandate of temporary civil administration over the Free Territory of Trieste employing public bodies and officers of the Italian Republic who, therefore, have the duty to enforce the pertinent international obligations and to respect the rights of both the administered Free Territory and of all States over Trieste's international Free Port.

Indeed, the Free Territory's rights and the rights of all other States over its international Free Port are part of the rules-based international order: they cannot be unilaterally amended by a temporary administering authority or by political bodies who are legally bound to respect and enforce them.

This means that the full enforcement of Trieste's rights and of the related rights of all States is not a subject for political debates; rather, it is a legal obligation and economic interest of the whole International Community.

However, the sub-administering Italian Government has long omitted to properly enforce those rights, thus causing serious economic damages to the Free Territory, to other States, to their enterprises, and to the international economy.

This is why Free Trieste stands to re-establish the rule of law at the earliest possible time. Either the sub-administering Italian Government complies with its obligations and does it, or establishing another administering authority proves necessary.

Free Trieste exists and works for this since 2011, in the name of absolute legality, following the path and instruments of law and information that better suit the positive solution to the problem, and causing the least embarrassment to the international parties involved.

The present-day Free Territory of Trieste (F.T.T. - T.L.T. - S.T.O.) and its neighbour States: Italy and Slovenia. 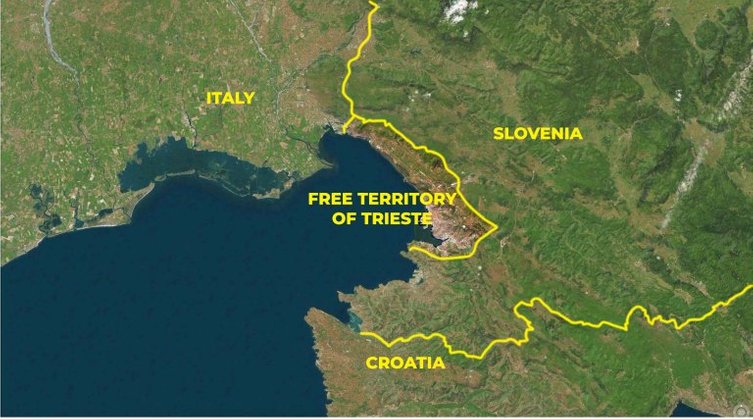