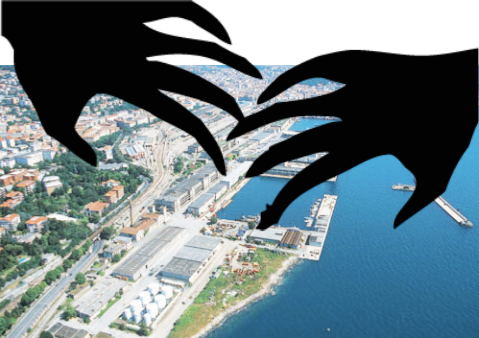 Trieste, 20 January 2016. – The Free Trieste Movement, which defends the status and the rights of the Free Territory of Trieste and of its international Free Port, has warned and denounced to Italian magistracy the Commissar of the Italian Government in Trieste and other officials and politicians for what the act, of date 19 January, defines «massive international fraud» and «one of the greatest and best covered scandals of the political-institutional system of corruption that devastates the Republic of Italy». Among the local politicians involved there are also the president of the region and deputy to Renzi in the PD, Debora Serracchiani, and the Mayor of Trieste, Roberto Cosolini (PD).

The subject of the warning and complaint (see LINK) is the attempt, by certain «Italian political-speculative circles» to complete a complex and years-lasting operation to eliminate the Northern (also called “old”) sector di of the international Free Port, to allow «illegal housing and building speculations amounting to about EUR 1.5 billions» and to favor the diversion of the new, extended traffics expected after the doubling of the Suez Canal and the development of the Baltic-Adriatic and transsiberian – via Vienna-Bratislava – routes.

According to the warning and complaint, the operation are be blocked by the opposition of the Free Trieste Movement and by the newly established International Provisional Representative of the Free Territory of Trieste (I.P.R. F.T.T), but politicians and speculators would be exercising pressing on the Commissar of the Government, Francesca Adelaide Garufi, to drive her to issue certain decrees in the last days before her retirement at the end of January, which are said to be “illegitimate”, that would give a start to the removal from State Property, urbanisation and sale of the area that is now bound by law to the status of free portThe operation would therefore violate both international and Italian law.

Back to news
HOME