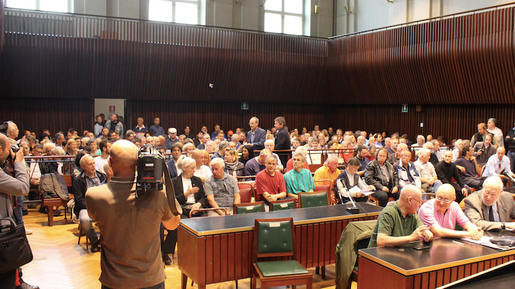 Trieste, 15 May 2018. – Tuesday, May 15th, before the Court of Trieste, started the last hearing of the legal action on taxation initiated on 22 May 2017 by the International Provisional Representative of the Free Territory of Trieste – I.P.R. F.T.T. versus the administering Italian Government, its Ministry of Economy and Finances, its Fiscal Agencies, and the INPS (LINK); 598 citizens and enterprises from the Free Territory and from other States joined the legal action.

The plaintiffs request the Court to determine and to verify that the Italian Government, for its role of temporary civil Government of the Free Territory of Trieste, cannot subject it to the excessive, unfair, and ruinous tax system of the Italian State, but should only levy the correct taxes envisioned by the special regime of the Free Territory and of its international Free Port.

The legal action is founded on the fact that, since 1947, international law and the very Italian legal system recognize the Free Territory of Trieste as sovereign State entrusted to the temporary civil administration of the Italian Government by the Governments of the United States of America and of the United Kingdom of Great Britain and Northern Ireland, for their role of primary administrators on behalf of the United Nations (LINK).

During the first hearing, held on 28 November 2017 (LINK), the Government, the Ministry, and the Italian Fiscal Agencies had lodged statements of appearance through the Trieste Office of the State’s Legal Service, and the INPS did the same through its local legal office, however, this defense has taken a position that the Italian Government cannot endorse.

The statements of appearance of the local defendants, for instance, endorse an old, anti-legal political thesis of local Italian nationalistic and Neo-fascist circles, according to which the Free Territory of Trieste “does not exist and never existed”. And in 2018, presenting in official act this thesis, in the name of the Italian Government, can give raise to an international incident.

After the I.P.R. F.T.T. reported this risk to the Italian Government itself, as well as to the primary administering Governments, during the whole investigation stage between the two hearings the defendants renounced to affirm that indefensible political claim again.

During the final hearing of 15 May 2018, the Court has therefore confirmed the acquisition of all the documents presented by the I.P.R. F.T.T. with its 598 supporters (300 of whom were in the Courtroom) and has set the deadlines for the parties to submit their final briefs and further statements of defence before issuing the judgment, which, under the law, should be in favor of the plaintiffs.

This legal event is unprecedented, and it appears evident that a favorable judgment of the Court of Trieste would also be the simplest instrument to avoid embarrassing the Italian Government, reactivating the correct administration of the present-day Free Territory and of its international Free Port, as well as of their extraordinary economic and fiscal advantages.